Burt Reynolds is being treated in intensive care for a severe bout with the flu. Millions of people are sick with the flu right now, but to hear that Burt Reynolds – an actor from whom we’ve heard nothing in a long while – makes me flash back to his years in the limelight. It is hard to believe he is 76. Remember his role in Smokey and the Bandit when he was driving that hot Trans Am with Sally Field ripping off the unwanted wedding dress and veil and tossing it into the wind? Or when he

played the football player along with Kris Kristofferson in “Semi-Tough.” Both of those movies were 1977 hits. I remember meeting Loni Anderson in the late 1970’s when WKRP in Cincinnati was huge. Around that time, Anderson and Reynolds connected. But their five-year marriage broke up in 1993.

Now, Burt Reynolds is a 76-year-old man who reportedly fought drug and alcohol addiction a few years ago. Reynolds has been married twice; it never stuck. When I was a teenager, I remember my mom talking about how Dinah Shore and Burt Reynolds were made for each other. She was 19 years older than him. He adored her and wanted to marry her. He said 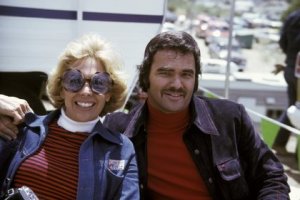 during a Larry King interview that he never knew her age and it didn’t matter. They truly loved each other. Someone wrote he was the male version of Rachel Welch. But Deliverance in 1972 put him in the ‘real actor’ category. He met Dinah Shore during that period; she was the darling of afternoon TV and had been famous since the 50’s and 60’s.

So, can you imagine now – Burt Reynolds laying in a hospital bed in Florida? You know he’s thinking of Dinah Shore who was probably his best friend. Maybe he’s dreaming of driving that Trans Am with Dinah ripping off the wedding dress and veil and tossing it into the wind. Get well.