Does this look like he’s packed for college? There are likely tens of thousands of 18-year old students just like my son who is living on the edge and packing at the very last second to go off to college. Why is it 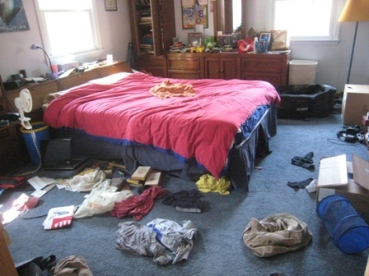 that I don’t feel any better knowing that?

Over the past year, I have tried often to avert my eyes when they wandered toward the general direction of Adam’s room. I floundered between putting my foot down and demanding some semblance of neatness and/or cleanliness when it came to tidying up his room, to shrugging my shoulders and thanking my lucky stars that THIS was the worst of our problems when it same to raising Adam.

In less than 24 hours, the chapter begins for Adam. He’ll be more or less settled in his dorm room and beginning a long weekend of leadership training with the group of young people who are part of the Presidential Service Corps program at Widener. I wonder how long it will take for Adam to realize that he is truly on his own when it comes to taking care of himself on a daily basis. Will he become a leader? Will his roommate be better or worse than him when it comes to their living arrangements and taking care of their small space that is less than 12-feet square? Will Adam understand that there are few second chances in college and mid-terms, finals and papers come on you fast and furious?

These questions and more are sure to shoot through his still-forming brain. Ah, he has just returned form his last day at work. Let’s see how packing goes tonight. I hope to sleep like a baby.