Camden’s reputation for being among the most violent city’s in the nation overshadows the many good organizations and people who work tirelessly to improve the poor and often overlooked city.

In the gray of winter, leaders of the Camden Children’s Garden have been notified that they will have to vacate the site adjacent to the Adventure Aquarium by March 31st. The Garden’s web site indicates

the site was to reopen full-time March 30th. The fight is underway to save The Children’s Garden and the program that has helped provide more than 2-million pounds of fresh fruits and vegetables for a city that has just one supermarket located a long bus-ride away for many residents.

Please read a message from a friend of mine – Mark Doorley – president of Camden’s Center for Environmental Transformation and give thought to the plight of The Camden Children’s Garden. 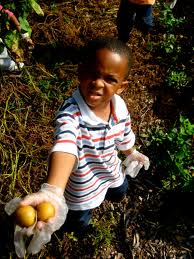 This is an emergency call for action to support a sister non-profit in the city of Camden that is dedicated to environmental justice and food justice. Two weeks ago the Camden Children’s Garden (CCG) received a letter from the State of New Jersey asking that most of their six acre site be vacated by March 31st. Without even talking to the CCG’s staff, the State wants the organization to continue its work of supporting the many community gardens throughout the City. This will not be possible with what the State has in mind for the CCG. It will be reduced to a rather small greenhouse and some office space, losing its much larger greenhouse facility as well as the meeting spaces where workshops are conducted for Camden gardeners year round. Why does the State want to shut down this gem on the waterfront? To make way for a more “glitzy” destination spot, to join the Susquehanna Center and the Aquarium, making this a “destination” spot. This is an outgrowth of a tired economic development plan which claims that if you make “glitzy” destination places, you will attract more people to Camden and those people will spend money in Camden. The glaring flaw with this analysis is that the people come into Camden, closing their eyes til they get to their “glitzy” destination, and they spend their money at these destinations, and that money ends up, in the case of the Aquarium and the new development under discussion, in the pockets of an Alabama-based entertainment company.

The Camden Children’s Garden serves almost every school in Camden, through summer programs and support for school garden programs. Children from throughout the area visit the Camden Children’s Garden for their many activities. The 50,000 seedlings grown by the CCG have brought to harvest 2.1 million pounds of produce for the people of Camden. It is a place where the children of Camden, particularly, can learn about science and nutrition, in a safe and inviting place. In my opinion, this is the kind of “glitz” we want on our waterfront.

There is reason to believe that the State’s move will not stand up under judicial review. There are now over 6,000 people who have joined the Save the Camden Children’s Garden Facebook page, and legislators are working behind the scenes to resolve this problem.

How can we help?

1. Donate to a legal defense fund; information to make tax-deductible donations can be found at the following link: http://camdenchildrensgarden.wordpress.com/legal-fund/

2. Sign the petition to save the Children’s Garden, which can be found at the following link: http://www.thepetitionsite.com/558/352/791/save-the-camden-childrens-garden/

3. Come out on Tuesday, February 12, 2013 to support CCG. Attend a press conference at the Garden on Tuesday at 4 PM. It is very important that children who have visited and benefited from the CCG be present at this event. Following the press conference, we will be marching to City Hall to make a presentation and plea to save the Garden to City Council. At the press conference, there will be hot chocolate for children to enjoy! More information on this effort can be found at the following link: http://camdenchildrensgarden.files.wordpress.com/2013/01/press-release-state-eviction-statement-for-email-rev2-6-131.pdf.

4. Join the Facebook page of Save the Camden Children’s Garden and invite your friends to do the same.

President, Board of Trustees

The Center for Environmental Transformation