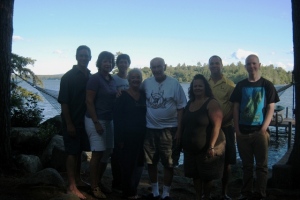 The P.S. to the “I Scream for Ice Cream” post came minutes after I had posted the missive. I shut down the computer and grabbed some things to take downstairs to my bedroom. The stairs were dark; the light switch was to my left, but it never occurred to me to turn it on. I had descended these stairs many times. They are wooden, steep and narrow with a right turn that includes three steps. However, I stepped on just one of those three steps and took a tumble to my left. My faced smashed into some boating equipment stowed in the corner; my left leg twisted and I guess I used my left hand to try to block the fall. Doug, Adam, Steve & sue along with my dad came rushing to the stairs. Doug saw the blood and was a little scared. I was probably in shock. Long story short. I’m banged up, but went to a doctor and I’ll heal quickly – I hope.I think we should put a chalk outline of me sprawled out at the bottom of the steps.

Andrew arrives -with a surprise --no hair!

when he saw that Andrew had shaved his head. He couldn’t believe Doug and I had NOT told him about Andrew’s hair. The look on Adam’s face was worth holding back. We got back to the house mid-afternoon. It was the last day and night with my family, so dinner was an event. We made chicken kabobs and then decided to take a boat ride to Meredith to The Town Docks for ice cream. I had a delicious cone of chocolate peanut butter yogurt. Mom, Sue, Steve, Adam and Doug along with Andrew also enjoyed their choices.It was nearly dark when we headed back in the light of a full moon. We watched the end of the Phillies game on my computer. I turned in – I was exhausted from the physical damage to myself and the long day.