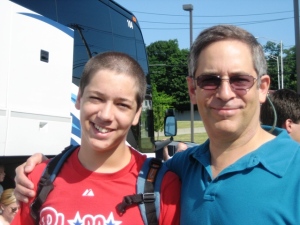 It would be GREAT to write about the wonderful, creative and informative letters I’ll be getting from my 16-year-old son who is safely ensconced in the fantasy world I call “summer camp.” After nine years of this summer adventure and countless reminders to him to “please write;” not to mention printing out personalized stationary, address and return labels, providing stamps and just about everything but actually writing a few words on the notecard, I am giving up.

Adam is now away until August 12 in the bucolic place called Camp Robin Hood. It is known as “The Realm” where the 325 or so boys and girls plus dozens of staff experience “the magic in the trees.” We’ve already enjoyed seeing him in several photos during the first days of camp. Adam leaves behind (most of) his electronics; there’s little, if any, texting, no regular TV or recording his “shows,” and most of all, no mom or dad to daily remind him to do things like – clean up his room, brush his teeth, set the table or take out the trash.

He’s 16 and on the brink of being responsible for not only doing his own laundry come September, but getting his driver’s license and being aware of the awesome grown-up task of driving a car and taking care of that vehicle. (Bless us all.)  For now, Adam is a CIT. Throughout his camp experience, his group of boys was almost the largest group in camp totally a little more than 25 boys at one point. Funny that now that the 16-year-olds have to partly

The inaugural splash into Broad Bay off Lake Ossipee.

“work” at camp, the numbers for his group are down to about 13. Granted, some of the boys may have found paying jobs elsewhere or other programs to enrich their lives. Adam won’t make any money this summer – he gets to go to camp for half-price in exchange for CIT work. My hope is that he’ll come back from camp more mature as he usually does and has a few “ah-ha!” moments. Those moments could be that he will or will not apply to be a full-fledged counselor next summer; found something he’s passionate about and will pursue in the coming years or that maybe mom and dad aren’t so nuts when they urge him to take care of his belongings and keep his room straight.

Back to the “letters TO camp.” I sent my first of what will be MANY letters to our son. We have just one child and despite the rough and tumble teenaged years, I realize we will only “have” him for maybe another year-and-a-half or maybe two years. He’ll be 18 soon enough and pushing the envelope of adulthood. Knowing this, I send him a page or two recapping a few days-in-the-life back on the home front. I do wonder if he reads my letters; since I send with them the Sunday comics and comic books and magazines. I even go so far as to punch holes in the letters so he can neatly place the letters in the stationary/letter writing loose-leaf he’s been taking to camp for years. Fat chance, right?

I’m glad I’m continuing to try to reinforce the old-fashioned and valuable skill of letter writing. There’s something about reading about someone’s life and understanding their thoughts that certainly a text or even a phone call can’t express. The generation we’ve seen zip by us has become one of technology verses emotions; Instant gratification versus understanding the value of waiting.

The other thought is, no matter what, I DO miss my son during these seven weeks. I’m a little jealous he gets to enjoy the “magic in the trees” while I plug away at my business as does my husband. But we look forward to hearing from Adam anyway, no matter what the form. He’ll probably write two or maybe three notes to us. The grandparents will get a note from him and he’ll probably call us once or twice.

It’s summer – he’s in a special place he loves and somehow we know he’s appreciating how hard it is to raise children – as he works with other younger boys at camp this summer. Maybe he’ll have to help the younger ones write a letter home!