You always say your child will be your baby forever. My favorite book when Adam was a baby was “Love You Forever.” The mother says to the child, “I’ll love you forever. I’ll like you for always. As long as I’m living, my baby you’ll be.” It’s a lovely verse from author Robert Munsch, but we really only have

our children for a short time. I cannot believe Adam went to his first semi-formal dance tonight. He looked great; acted a little awkward in his new suit and shoes, but I hope he has a fabulous time. As I write this, there are about 45 minutes left at the dance. I can only imagine how a few hundred sophomores and their dates act.

We dropped Adam and his date at the dance after pictures at our house and then at his date’s house. They looked lovely. They seemed excited and looking forward to seeing everyone all dressed up. I tried to give Adam advice on etiquette and treating his date nicely. They’re just friends from church, so I don’t think there will be any drama. I know all of them are just filled with hormones and emotions. You just want your child to be well and be happy. I hope he doesn’t dance like Elaine on “Seinfeld.” I hope he doesn’t spill anything or spit out food accidentally. Then there are the questions: will he slow dance? Will he have another first kiss? Will he dance with anyone other than Julia? Will he dance at all?

I wanted so badly to peak in at the catering hall where the dance is taking place. Doug wanted to as well I think, but we knew we couldn’t. That’s the hard part now. We can’t be there for everything as we were during the first years of his life. Every day they slip a little farther from you. Once they start going to school, it’s a day-by-day journey that takes them on their own path. They need you less and less. They still ask for your help sometimes, but they don’t really need you. There is one thing that remains from Adam’s childhood. Every night as he’s going to bed and every time he leaves the house or talks to us on the phone, he ends with, “Love you.” He does that all on his own. Maybe author Robert Munsch is right, “As long as I’m living, my baby you’ll be.” 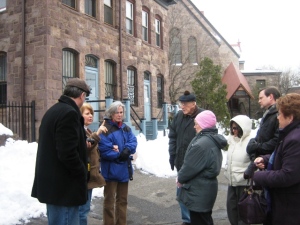 Let’s continue to pay it forward. More than 30 people gathered to learn about stepping up their service to the people of Camden. They came from Voorhees, Mount Laurel, Haddon Township and Ambler, PA. They all want to help bridge the divide of what Father Michael Doyle has said is the “1000 miles” between the suburbs and Camden.

The joint effort between The Center for Transformation (Mark Doorley and Andrea Feirich), Sacred Heart Church and Sustainable Cherry Hill (Lori Braunstein) began with the January 21 “Poet of Poverty” screening in Cherry Hill featuring Father Michael Doyle. More than 230 people attended that event introducing many to the fact that every flush and nearly every scrap of trash ends up in Camden. The follow-up event February 13 gave participants an up-close look at the Center for Transformation’s, well, transformation that is underway in the former convent building as well as a look at the church sanctuary. Across the street, they heard from two teenagers in the greenhouse who explained projects including, production of rain barrels built by the young, urban farmers, the beginnings of an aquaponics project to raise tilapia, and plans for  a fruit tree orchard nearby off 4th Street. The eco-tour also showed how the Waterfront South

Center for Transformation renovations in the former convent

neighborhood remains in the shadow of the county sewage treatment plant, but how efforts are continuing to raise up the neighbors and citizens to improve their lives as well as their homes, gardens and parks.  They heard about renovations of the building for the new theatre and nearby houses.

The outcome of the gathering is expected to bring into the fold, more hands, hearts and minds supporting the many programs and projects stemming from Sacred Heart and the Center for Transformation and helping to close that “1000 miles” between the suburbs and Camden.