A double rainbow after a deluge

No matter how optimistic you try to be, it always seems there’s some one or some thing wanting to rain on your parade. The three of us headed to the ballpark last night to see the Phils and Braves. We decided to get a sandwich at Tony Luke’s on Oregon Avenue. As we waited in line, we had a view of a very ominous sky. Before our sandwich order was ready, you could see the storm literally, coming over Oregon Avenue from the west. The summer storm rained down on the flat, metal roof at the take-out store. Cars continued to pull up to Tony Luke’s and at one point, an SUV created a wave that gushed over the curb, sending customers in flip flops and sandals scurrying as they tried to (unsuccessfully) keep their feet dry. The half-hour storm passed to the east about 15 minutes before game time. A rare and beautiful, full, double rainbow formed. So many people stopped to take photos. 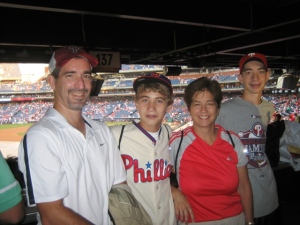 We met our friends, the Brauns at the game. Because of the rain, the grounds crew needed time to do what they could to dry up the field a bit and roll up the huge tarp that covers the infield. The game was a disappointment with Cliff Lee suffering his first loss as a Phil. After the 7 th inning, Doug and I decided to go to the section where our friends and our son were sitting, which was under cover on the first level. About 10:20, the heavens opened up. The wind had picked up and the flags in center field were stiff in the wind. In seconds, the teams scurried off the field along with the umpires and the game was in rain delay. Earlier, I had noted the Reading Phils game had been called in the 7th inning; I was concerned the rain from the west would be coming to South Philly. Boy, did it ever rain…and rain..and rain. This photo doesn’t show how unbelievably intense the storm seemed. There was a grounds crew guy walking the field, splashing and sinking into the outfield the entire way. Thirty minutes after the rain delay began, Phillies announcer Dan Baker told the remaining fans the game was called.

Torrents of rain; run for cover!

Now, we had to make our way to our cars. Doug went first, deciding to bring the car closer to the ballpark and pick up Adam and I, along with the Brauns. All seven of us were in our car; we found the Braun’s van and they went off into the rainy night. Fortunately, we made it home with no problems, except for drenched feet and the knowledge that the Phils lost big to the Braves 9-1.

A sunny Sunday meant sleeping in a bit, then tackling some work I had to do. The day was quiet and peaceful until lunchtime when the wailing of an animal sent Doug and I running into the backyard. It was a horrendous cry of distress; you couldn’t tell what type of animal was having a problem, but you knew for sure, the animal was in trouble. We followed the sound of the wailing. The hawk the visits our yard often was back. He cornered a rabbit under the forsythia bush and was definitely winning the fight with the rabbit. Hours later, Doug took care of the remains of the rabbit who had suffered such a painful ending.

Elmer looks for dinner near our veggie garden

Later in the day, the hawk was back, perched on the cage above our vegetable garden; his head turning like Linda Blair’s in the Exorcist, looking for dinner. As far as we could tell, the hawk only scored a few bugs and no small animals. I don’t think we’re eating dinner out on the patio tonight. Doug has named him Elmer for going after the “wascally wabbit.”