Some people are morning people; some people are not. I happen to fall in the former category. While my old work shift had me waking up the birds, it is so wonderful after eight years of sleep deprivation to wake up with the birds. Actually, it’s been waking up with the red squirrel squealing and chomping on a tree outside out bedroom window on Danforth Bay. But, I’m not complaining.

The heron shows us the way

We actually slept in today until 7:30. By 8, Doug and I were gliding in our canoe on a mirror-flat lake with the morning sun just starting to warm the air that was so cool and comfortable through the night. We went to the Danforth Ponds where only canoes and kayaks can maneuver. The lily pads make Monet look like a fake. The beaver lodges are enormous and plentiful. A rustling in the trees caught our attention. It was a huge bird with a 4-foot wing span. It glided from a tree to the brush on our right; we caught up; he flew farther along the pond. This was a heron; slate blue with a graceful flight that seemed to be showing us the way along the pond. The heron did this a few more times, then flew back to the tall tree where he surely perched himself again to watch for the next group of people in a canoe or kayak. We made our way to the large pond where a lone man in a canoe was fishing. We kept our distance respecting the quiet of a fisherman. We paddled toward the sound of water, which was all we could hear in this pristine spot. We found the small creek feeding into the pond. Just as we came about, the fisherman said, “Look!” He was holding up his catch. We couldn’t react fast enough with the camera, but we gave him a “thumbs up” as he released his 18-inch catch back into the pond. He must have been so pleased someone was there to witness his catch of the day.

A fisherman after releasing his catch

While Adam and Andrew slept in (until noon), Doug and I decided to go on a little hike. Mount Mary, which overlooks Danforth Bay rising nearly 1000 feet. From the base of the trail we chose, we only had to climb for about 15 minutes. 1/2 mile later, we were at the top, the only people on the trail and atop the mountain, looking down on Lake Ossipee and its bays, channels and ponds. 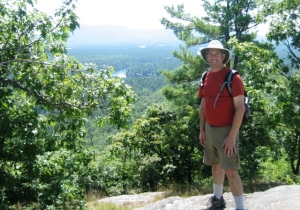 Lunchtime turned into an early dinner before we packed up to head to my brother-in-law’s vacation rental house in Meredith, about an hour away. Doug had a chance to water ski one more time and he had to take him up on the offer. The boys weren’t really excited about hanging out with relatives again, though they knew at the end of that visit they’d be going to the world’s biggest arcade, Funspot, near Weir’s Beach. We decided to let the boys have expanded arcade time, by dropping them off before we went to Meredith on Lake Winnipesaukee. Good call.

We arrived at Greg and Theresa’s rental house where Barry, Joan and Carol had already arrived. We quickly loaded the boat with Greg and Theresa’s three kids, Carol, Barry, myself, Greg piloting and Doug at the ready to ski. Doug was determined to get up and slalom ski. After one failed attempt, he got up and skied around the cove. It was glorious to watch him skirt across the lake on one ski. He jumped the wake and maneuvered from one side of the boat to the other. Then, he’d had enough. The 50-year-old arms and legs just don’t last like they used to. Nicklas, all of 8, wanted his turn tubing. Greg wove around the lake for a while and I swore Nicklas would just fly off that tube, but he held on for dear life and loved every minute of it. Doug then had his chance to “hot dog” it for the kids on the tube. Doug caught some air a couple of times as Greg tried to zig zag around, I’m sure, to try and toss his brother off the tube into the lake. Didn’t happen this time!

We said our goodbyes to family, then picked up the boys at Funspot where they thoroughly enjoyed nearly two hours of arcade games and some unhealthy snacks. We’re back at the house; the boys build a fire in the pit by the lake; they’re talking about everything and making s’mores. It’s almost sweet dreams, from Danforth Lake.